Blender is becoming a standard 3D software application and, according to AMD, needs to be able to work in a larger workflow of other applications. Pixar’s Universal Scene Description (USD) has made exchanging data between 3D applications easier for artists, opening a robust, open way to exchange and assemble data from multiple applications. AMD says that Blender users should also be able to experience the same ease of use and dedicated experience with USD.

AMD has launched a project enabling USD data assembly and rendering inside of Blender. Brian Savery, Professional Graphics Software Development Manager for AMD said, “Blender includes a basic USD exporter, and soon will include import tools. However, there is no method of rendering existing USD data within Blender or referencing a USD file into your Blender scene. Other tools that support USD, such as SideFX Houdini or Autodesk Maya, also allow assembly and manipulation of USD data. 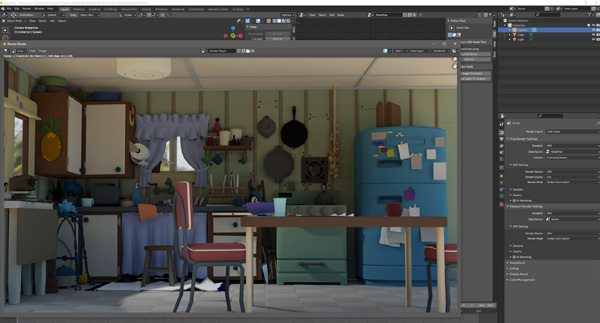 “Furthermore, while Blender users create intricate shader networks for its Cycles path-tracing render engine, they need a way to share shading networks with other applications. USD includes a rendering system called Hydra that allows multiple renderers with one common interface. AMD adapted this system to work directly inside Blender. By adapting Hydra as a render add-on to Blender, any renderer that supports Hydra can be connected to Blender by plugging into the Hydra add-on.”

Another important aspect of USD support is enabling USD scene composition in Blender. AMD achieves this with a custom node graph, allowing users to pull in external data to mix with Blender data and filter, manipulate and export USD data. This allows tools for pruning data, referencing data without loading it into Blender’s memory, interaction between multiple artists, and exporting composited scenes for offline rendering. 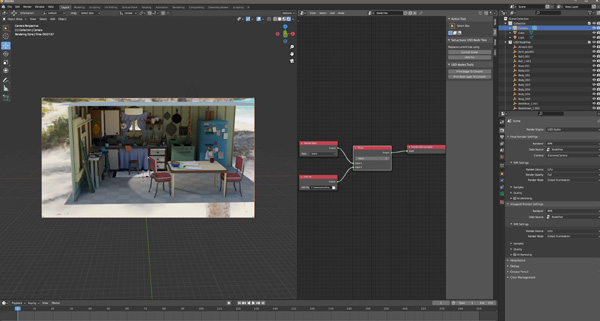 Similar to USD geometry, AMD handles materials using the open source MaterialX open standard. Created by Industrial Light and Magic for sharing material graphs across renderers, it is quickly gaining acceptance as the standard material format. This makes it possible to add material node graphs from Adobe Substance 3D Painter and various Autodesk applications, as well as export them.

MaterialX is a growing standard with increasing adoption across applications. To help encourage adoption, AMD plan to launch a free Material Library for sharing MaterialX materials on AMD’s GPUOpen.com. Users will be able to use it to download materials and import directly to the Blender Hydra plug-in.

The video linked here is presented by the author of the AMD USD plug-in for Blender as an overview of the main features.   www.amd.com