Cinema 4D R25 and Trapcode 17 Get Updates for Artists; Redshift RT in Beta 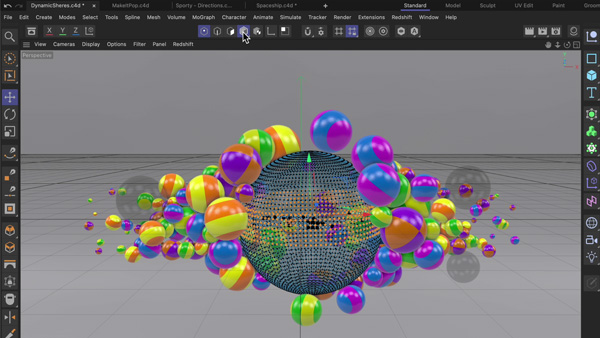 Maxon has updated applications across the company’s Maxon One combined package of software tools. Cinema 4D Release 25 and Trapcode Suite 17 have new functionality and Redshift RT is introduced as a Public Beta version.

The new UI in R25 reduces complexity to avoid distraction, adds new, clearer icons and makes the sliders more distinct. Layouts can adapt to the current mode, object or tool with the new Dynamic Palettes, laid out to optimise screen real-estate and put the relevant tools in reach. 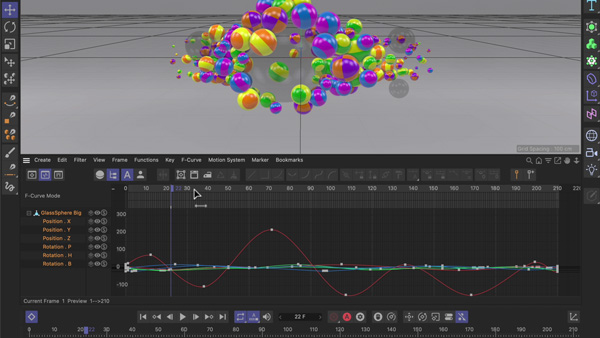 New browser-like tabs at the top of the Cinema 4D window help switch between open documents or key layouts. Layout switching on multi-monitor displays is more consistent, and the width or height of layout elements can be maintained while switching resolution. Number fields in the Cinema 4D R25 Attribute Manager now work as virtual sliders. Users interactively adjust the values by clicking-and-dragging over the fields, or using the up and down arrow keys to increment the place value.

Capsules are a new way to use Cinema 4D's Scene Node system. Capsule Assets constructed in the Scene Nodes core work like procedural plugins, and can be used directly in Cinema 4D's Classic Object Manager as primitives, generators or geometry modifiers – within the same hierarchy. 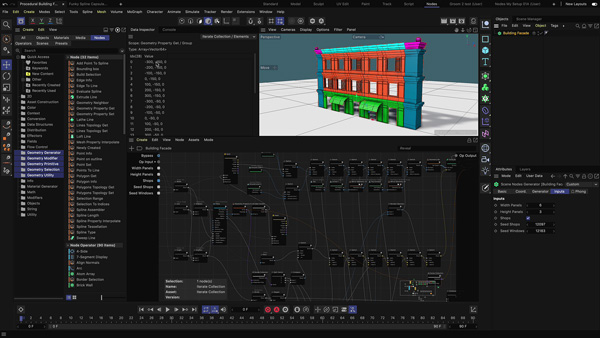 Five types of capsule objects can be used this way. The object group works like a generator, the geometry modifier group act as deformers, the selection modifier group procedurally creates and modifies component selections for procedural polygon modelling, the mesh primitive group allows you to create your own primitive mesh objects and the spline primitive group creates primitive splines. Each object has its own node graph. Parameters from the node set-up can be exposed and edited. So, now you can combine regular workflows with scene nodes.

Spline Import updates allow users to import vector artwork from Adobe Illustrator, PDF and SVG files to use in 3D scenes. For example, splines are imported from Adobe Illustrator files saved with PDF compatibility, supporting symbols and gradient-filled shapes as well. Vector art stored in the SVG format can also be imported. Vector artwork is automatically converted to 3D, with options to offset paths and layers in 3D space, define extrudes and sweeps to represent filled and stroked paths, and replace or reload artwork. 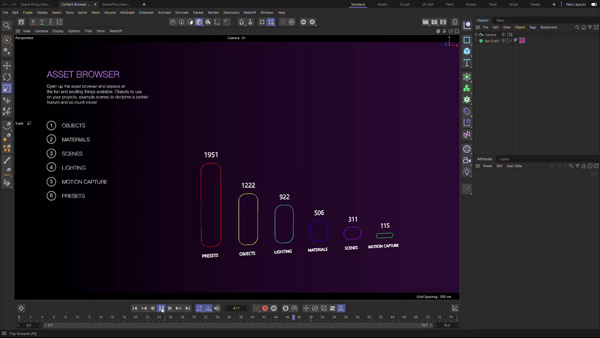 A new Asset Browser gives access to searchable libraries of preset content stored locally or online, including a collection of 3D objects, materials and node capsules available to Cinema 4D subscribers. The assets have rich metadata and keywords, and are cached locally for re-use. You can also add favourite keywords yourself, and save frequent searches in smart folders for those words.

In the Asset Browser, presets for objects, tags, materials, tools and other Attribute Manager elements are stored, specifying defaults and recalling presets for each element via a drop-down menu. Dedicated presets can include gradients, colour swatches, cap profiles and other elements.

A searchable palette of common assets can be placed directly in Cinema 4D layouts, and individual assets, folders or smart searches added to icon palettes. Assets will be immediately added to the scene, with a pop-up Browser window for the searches and folders. Asset Versioning, useful in complex pipelines, is available, and object-based assets may be inserted as objects, Instances or References for flexibility and efficiency.

Cinema 4D’s upcoming Scene Manager, still in progress, uses node-based assets to construct procedural geometry or an entire scene in a hierarchy-based view. Eventually the Scene Manager workflow will allow you to integrate Classic Cinema 4D objects by dragging them into the Scene Manager. Everything done within the Scene Manager also creates a corresponding node graph within Scene Nodes, so you can choose the best workflow for your job. 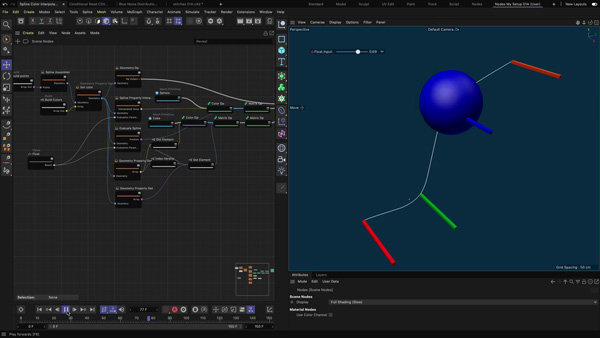 Users can manage relationships and dependencies between objects, construct and modify geometry, and build reusable assets with the Scene Node core, as well as debug scene node systems.

For TDs, the main value of Scene Nodes is the ability to expand the potential of a system without using any code. Support for splines in the Scene Nodes core makes it possible to assemble linear, bezier, b-splines and NURBs splines. Properties like colour, weight and normal can be assigned to points and the interpolated position, tangent and values can be retrieved along the spline. Also, new Spline Primitive assets can be created with the spline primitive group (see Capsules).

Supporting data integration, CSV files can be imported and used in Scene Nodes setups for rich 3D data visualisations. Capsule assets have various data visualisation options that can be applied to any data. Values can be passed into Scene Node setups with a new Command Line Argument node, rendering dynamic content without opening Cinema 4D. 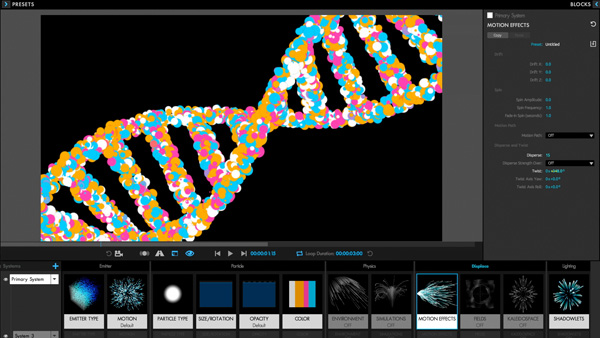 Trapcode 17 now makes it possible to work with Particular and Form in the same 3D space by bringing some Form behaviours to Particular, including Kaleidospace, Disperse & Twist and Distribution, and vice-versa. The release also upgrades the Flocking simulation, which has new On Predator/Prey Contact and Team designations. Users can select more than one particles system at a time in the Designer to apply commands to, Spherical Field and Turbulence Field have new 3-axis controls, and new Emitter Behaviours can now be applied to immortal particles. 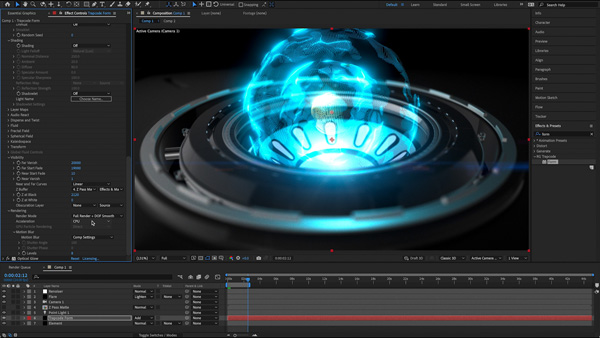 Form now shares Z Buffer Group and Obscuring Layers with Particular, for working with 3D and depth layers. Audio React and Layer Maps are now available in all eight base forms. Two colour randomisation tools, Color Random and Random from Gradient, are available and, as in Particular, the Create Null button automatically creates a Null in a composition. 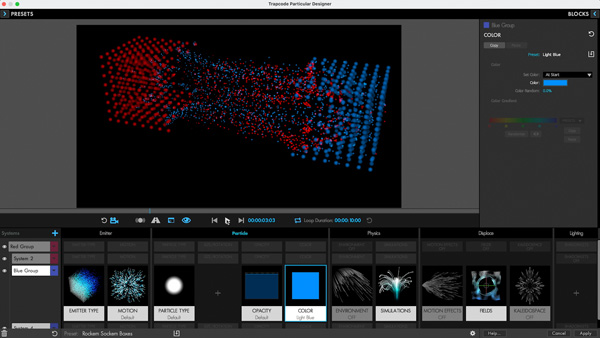 Colours can now be labelled in Particular 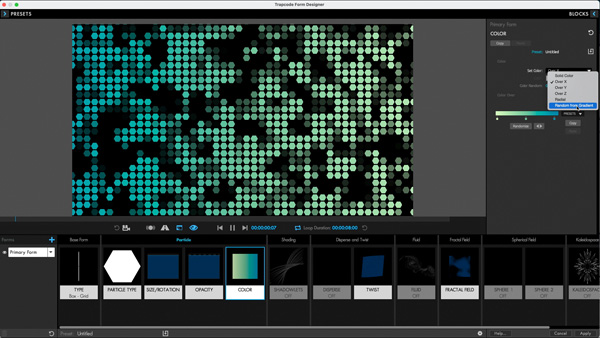 Because Redshift is now available as a subscription product only, new features and updates have been delivered throughout the year. These include macOS compatibility via support for M1-powered Macs and Apple’s Metal Graphics API. Greater support for OpenColorIO (OCIO) v2 has resulted in more accurate, cinematic colour through the use of ACES and other custom colour profiles, and a 3ds Max OCIO colour picker. 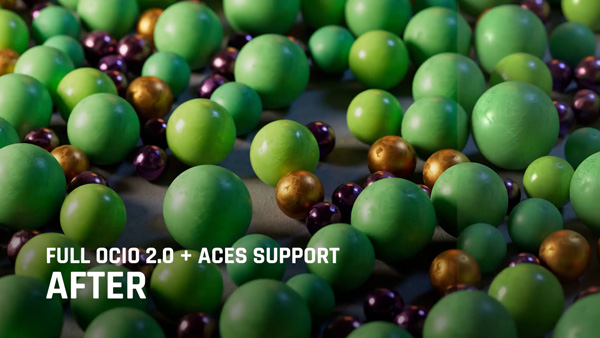 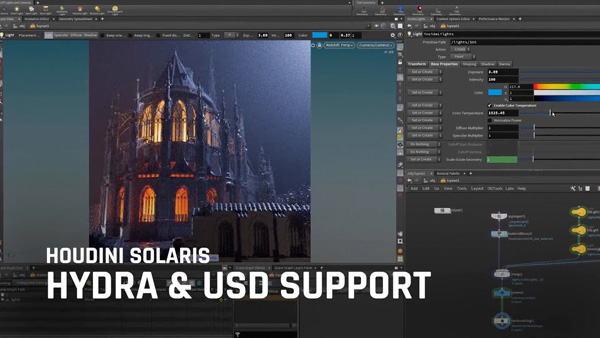 The new Redshift RT rendering mode has completed its alpha stage and entered public beta. Redshift RT mode achieves near real-time rendering performance using the same shaders and lights. It co-exists with the standard Redshift render engine in the same DCC and scene, without affecting efficiency. Artists can use it during development of a project or even at final render if the project does not need the same level of fidelity as standard Redshift.  www.maxon.net 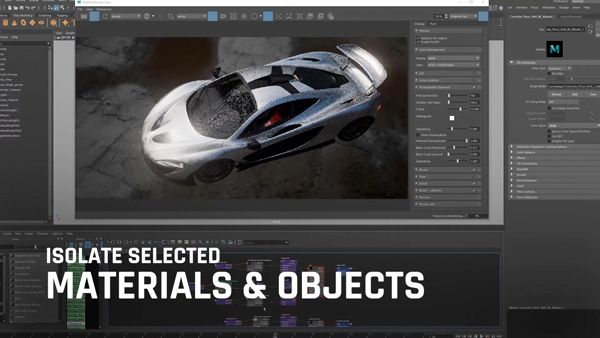 It's now possible to select and isolate materials in Redshift.