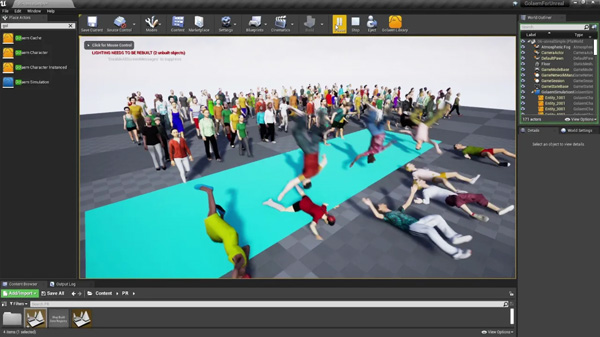 Golaem 8 also increases the quality of crowd previsualisation inside the Maya viewport, while maintaining performance in Golaem. Nicolas Chaverou, Product Manager said, “Golaem is used by animation studios for TV Shows and Feature Films of all kinds. Combined with the new Layout layers, this update will make it easier to validate crowds before rendering, and iterate faster.”

Golaem simulations can now be completed in real-time within Unreal Engine, reacting to player actions, or reflecting changes in the environment. This new workflow, the Golaem Crowd Simulation Real-Time simulation engine, speeds up scene creation in Unreal Engine, and allows you to use Golaem’s character simulation capabilities for interactivity. 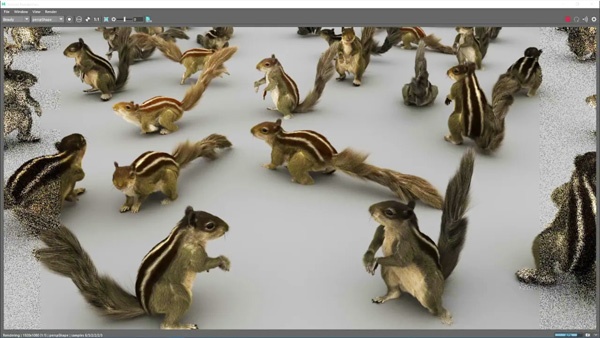 A new Golaem execution engine has been integrated into Unreal Engine. It includes Golaem Blueprint nodes, which allow users to create interactions between Golaem and Unreal Engine. This Blueprint integration can be used to trigger events in a Golaem simulation, or to override its placement or simulation parameters.

In order to make it easier to use Golaem in the Unreal Engine, all characters from the Golaem Character Pack are available as ready-to-use Unreal Engine characters, complete with diversity shaders. Setting up a Golaem scene in Unreal Engine is therefore very quick.

Previsualisation directly in the Maya viewport is improved in Golaem 8, while keeping the same performance. Diverse shading across all characters is supported, and also viewport depth of field and fog features with Golaem characters. Artists can check the look of crowd characters directly at simulation time, and use Golaem Layout layers, which allow scenes to be edited after simulation, to override parameters if needed. 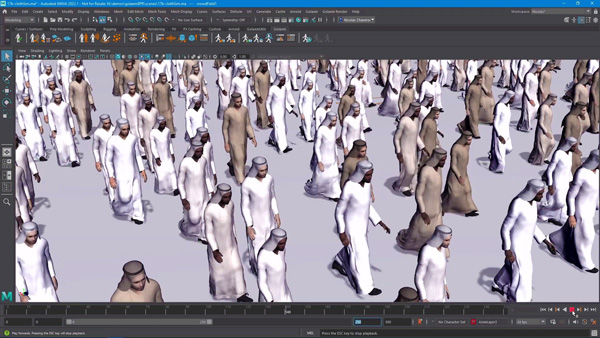 To make shading distribution more controllable, weight sliders are added, similar to the ones used for asset repartition. Artists come very close to the final look for a crowd, and keep artistic control using the Golaem Layout shader override nodes.

Golaem also has a new Mesh Drive display mode, generating real Maya geometry for all characters, including all deformations, allowing users to check the final look of a scene before rendering. Due to this Mesh Drive display mode, Golaem characters are now renderable with any renderer. That is because, for reasonable performance, Golaem Crowd characters are not real Maya geometry, but are rendered using procedural plugins for specific renderers, called by proxies. These plugins load a simulation cache and hand the geometry to the renderer.

For visual debugging, Golaem 8 now displays the behaviour triggers status in the Behaviour Editor in real-time. By clicking on a character in the crowd, the user can follow its behaviour, check when events trigger a behaviour or not and debug blocked behaviours. 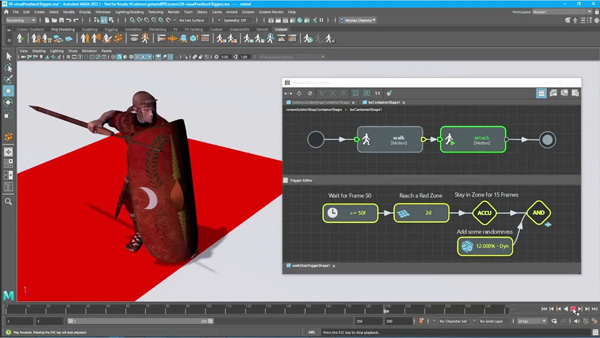 Displaying the behaviour triggers status in the Behaviour Editor.

Golaem 8 has new Layout layers. With the Trajectory Edit Layer, you can adapt character trajectories to changes in the environment or the story, for example, using either a mesh-based mode with deformation tools, or a curve-based mode that preserves the characters’ speed while deforming the trajectory.

The Snap-To Layer is used to re-populate a scene with the Golaem Layout Tool, placing a group of people on each of a series of user-defined positions. The Mirror Layer mirrors a simulation cache geometry and animation in order to adapt an existing cache to a new environment or script, but also to affect random characters in scenes to create diversity. 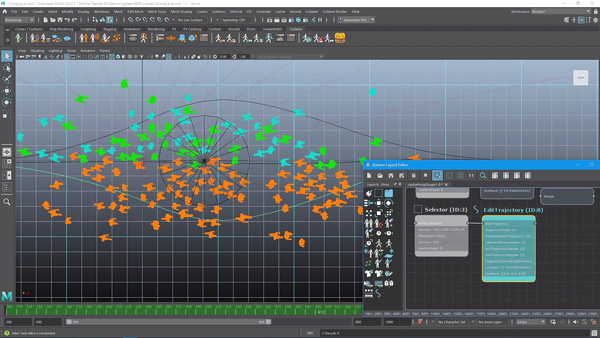 The Golaem 8 Layout Tool can now make use of keyframing on two new layers. On the Kill Layer, the characters’ visibility can be animated during the shot to make the population evolve, and with the SetMeshAssets Layer, characters' equipment or garments can evolve as well.

Golaem does include rules for automating LOD, but now has a more controlled way to set the LOD by selecting characters directly, in the viewport. After selecting, you only need to add a Layout node and set the LOD level.

Lending more realism to the simulation physics, a Torque attribute (twisting force) is added to the Force Behaviour, giving control over how characters react to events such as explosions. 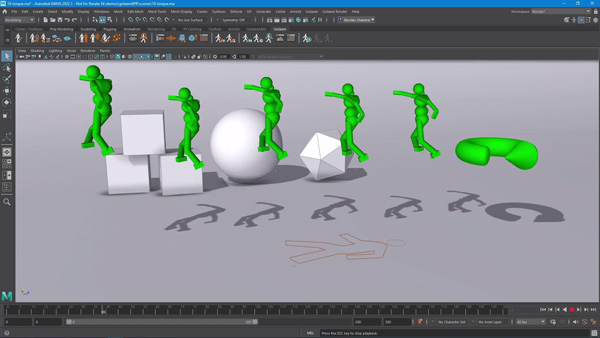 Due to the integration of NVIDIA’s Apex Pytorch extension, Golaem can simulate clothing in real-time for numerous characters. Through a partnership with NVIDIA and Autodesk, Golaem is maintaining the Apex plugin code and hosts builds for Windows and Linux, and new versions of Maya.

Golaem generates morphology variations via the Skeleton Overrides feature. Morphologies like small, tall, thin or fat can be added to character definitions by setting scale ranges for each bone and then controlling their distribution the same way as other assets, mixing as required to achieve a natural level of variation within the population. 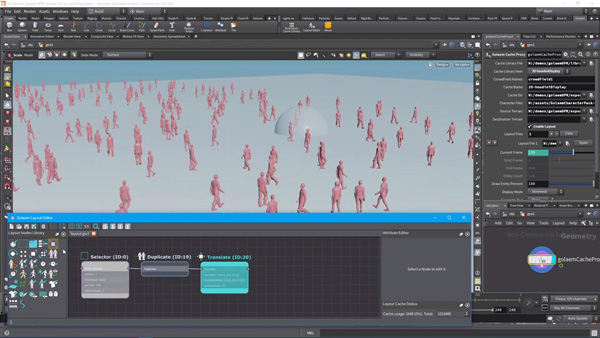 Golaem has a procedural fur workflow with skinned fur that can be deformed along the character animation and bone chains. It is compatible with most major fur simulation tools such as Xgen, Yeti and Ornatrix, and proprietary engines that can be imported within Maya as curves or Alembic curves.

Golaem also has a dedicated plugin expanding simulations to real Houdini geometry that can be brought into Houdini. The Golaem for Houdini plugin comes with the Golaem Cache Library and Layout Tool supporting imports and modifications directly in Houdini. Golaem characters can also be rendered in Mantra.

Golaem includes a procedural plugin for Pixar’s USD as well. It efficiently loads Golaem characters into the USD pipeline and makes them directly usable in digital content creation tools supporting USD. This plugin is available for USD Standalone, Houdini and Katana. The procedural code is also open source, for studios building the plugin themselves. 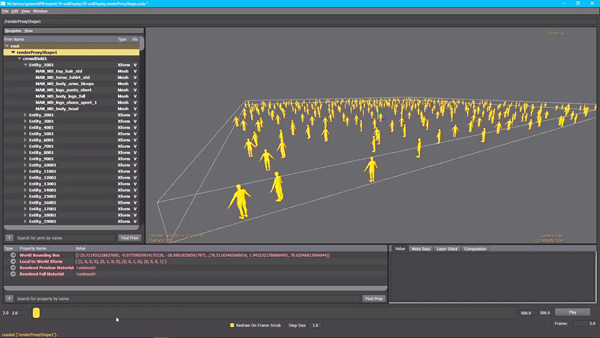 Golaem 8 is compatible with all the versions of Maya from 2018 to 2022 and supplies integrations with 3dsMax, Houdini, Katana, Unreal Engine and all USD-compatible platforms like Unity or NVIDIA Omniverse.

The Golaem Crowd Simulation Real-Time simulation engine is available through Golaem for Unreal Engine or as a standalone C++ SDK.   golaem.com