Building Scenes Behind the Scenes of ‘The Wolverine’

Jacinta Leong is an Art Director who took an opportunity to step out of her usual role on ‘The Wolverine’ to assist the Art Department’s designers, the special effects team and the visual effects teams. She worked as a witness camera operator and photographed props for textures, and also researched designs and modelled some major assets for the movie.

With the Art Department’s team of artists, Jacinta researched the Japanese bullet train that had to be built physically for the stunt shoots, as well as digitally as a CG asset. She explained that over time, a few different models of these trains have been produced in Japan, defined by their year of manufacture and their designated route. “For example, some trains had large rectangular shaped windows like a bus, while others had the small round porthole types, which the movie’s production designer François Audouy preferred. Consequently, our train design went through many evolutions due to script, design, stunts and budget,” she said.

“We looked on the Internet to find genuine plans and specifications for the trains. These didn't have to be overly technical, they just had to be believable in appearance. Actually, our most valuable reference was photographs of the actual vehicles that François, supervising art director Ian Gracie and members of the Art Department took of train interiors in Japan and sent back to us in Australia. These were gold - not only for the drawings, but for the set decoration, construction, and scenic and SFX departments.”

While researching the original materials helps the Art Department determine the finishes of the surfaces, such as brushed aluminium or types of plastic, the construction department and scenic artists have to build to suit their methods and use materials that achieve the look and meet the budget. For example, they might annotate the drawings with ‘As vac-formed ceiling panel’, knowing that the panels for the set would be built of sheet plywood made to look like plastic panels.

“Using AutoCAD, I modelled several different bullet train versions for visualisation and construction drawings. These files were given to artist Mara Garazini to detail elements such as the bathroom and luggage compartments, using VectorWorks, and also to Alanna Baudinet working in ArchiCAD, who detailed the bulkheads, doors and ceiling.

“Each person could just use the software they were used to - for this project, the main thing was being able to exchange assets between ourselves, and clearly communicating the information in the drawings to the production, construction, set decoration and SFX teams. Because time was tight, three of us in the Art Department shared the bullet train model so we could work in parallel, detailing the separate areas.”

There were four separate set builds - the bullet train’s main compartments, an additional accordion segment to show the Wolverine’s claw damage, the roof for the fight scene inclined for stunt performers to slide along, and an outside side panel and partial interior positioned vertically to allow gravity to assist the stunts. Digital files really suited designing assets like this because each of the different train configurations could be modelled and drawn using the same objects from the main file.

Jacinta said, “This made creating the files for the three other separate stunt builds straightforward as well. For example, the roof was already modelled in the main file, which comprised the entire carriage interior and partial exterior, so this asset was reconfigured into a file to draw the stunt roof set. We could also make changes for the stunt builds, mainly altering lengths and annotating what parts of these sets were seen in camera. Different steelwork was also required for the roof set in order to set it on an incline.”

Working with the visual effects department, Jacinta also operated one of three witness cameras on the Yashida Laboratory set. The different viewpoints the cameras were recording were used to triangulate the scene, creating essential data for compositing effects such as face replacements and carrying out wire removal. The aim was to capture the entire scene simultaneously with the main shoot, which meant including the shoot cameras themselves in the shots wherever possible.

“The witness cameras are there to document the entire scene of action in relation to the principal cameras,” Jacinta said. “We tried to position the witness cameras at approximately 45° either side of the action, behind the principal cameras, and far enough back to capture the positions of the principal cameras. It wasn't always possible to get into these optimum positions, for example if there wasn’t enough room on the set, but when viewed simultaneously, this triangulation data informs the VFX team of where everything is, such as characters. Consequently, the data was also used for face replacement and wire removal.” 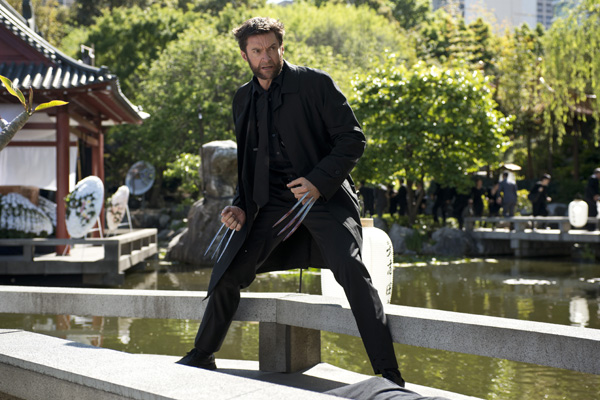 In documentary style, they also captured positions of lights, and at the end of each take - while the lighting set up was still in place - each prop, including the claws, the Silver Samurai helmet and so on, was put in front of the principle camera, an ALEXA, so that the VFX artists would have details of the props' characteristics within the lights and colour of that particular set environment. The chrome and grey spheres were also put in front of the camera and meanwhile a Canon 5D photographed each scene for HDRI information.

“I also assisted Weta Digital in the texture shoot, when each prop and weapon was thoroughly photographed, off the set in a separate area with controlled studio lighting, with a Canon 5D Mark II. The detail our images needed to show for each item included how the surfaces were burnished and smudged, and their essential ‘black shape’. Using polarising gels, B&W chequered panels and a torch helped us highlight this information. We even photographed the animatronic grizzly bear for the Yukon sequences,” said Jacinta.

“The object's black shape is its physical, exterior shape, regardless of colour, texture, reflectivity or translucency. It is important to isolate it as a pure piece of geometry, without the textures. The chequered panels were used to watch how the object reflected the chequered pattern, revealing all the subtleties of the imperfections in the surface, and any changes in reflectivity in the material. The polarising gel placed on the light and the polarising filter on the camera reduced and eliminated the unwanted glare and oblique reflections from the surfaces of the objects.”

The witness cameras moved around a lot because both the talent and the principal cameras in most scenes were constantly moving. If the witness operators tried to remain static, they might have been captured in shot themselves or they might have missed the best angle. “In one scene, I thought I had picked a perfect position to capture the talent and principal camera,” said Jacinta. “I was on a scaffold platform, 3m high off the studio floor and just outside the broken wall off-set. I was definitely behind the principal camera but just after the 2nd Unit director called “Action”, someone said, "Jacïnta, you have to move. You're reflected in the Silver Samurai!"

Along with the witness cameras’ triangulation data, both surveying and scanning were carried out on the set. A contractor working with Weta Digital’s VFX supervisor Martin Hill regularly brought Leica survey equipment on set to survey the set in its changing and various states, making sure to capture the tracking markers added to the set throughout the day, and the principle camera’s positions whenever possible. To help avoid confusion later, LIDAR scans were also made of the set and props from time to time.

In the third act of the movie, the Laboratory set was a scene of dramatic demolition caused by íntense fighting action. The physical set build required breakaways for parts of the elaborate, multi-story structure, including a tall, heavy steel gantry that was to fall during the sequence. “Although the gantry was cut from the story about a week before the shoot,” Jacinta said, “its design and build process was typical of the way the Art Department, SFX team, engineers and the production work together when creating sets.

“We built two and a half stories of the Laboratory. Assistant Art Director Andrew Chan had already modelled the gantry for design and construction drawings, and the pre-viz company Halon had already generated a basic gantry fall, but only theoretically - in the computer. Now that there was a physically built structure on the sound stage, made of steel, with physical characteristics - and real gravity - it had to be engineered to work accurately and safely.”

Likewise, the breakaway had to be designed so that the gantry would fall safely, realistically and at the same time feel threatening and precarious. She animated the gantry falling several different ways to determine, for example, how far it would fall at different angles and how safely it could be done, illustrating explosions and how the concrete wall of the set could shatter with the fire and smoke tools in 3dsMax.

Using 3DSMax, she sliced the digital gantry at two places, and animated it to fall and almost hit the other rotating gantry below. This allowed us to check its maximum fall, the angle for talent to slide down, and the length of cable required to give it a controlled fall. Steve Szekeres from SFX advised on the castors and designed the steel plates and hinges they needed to fabricate for the breakaway. The cuts and hinges were applied to the gantry, and then steel plates were bolted in place to keep it in its undamaged state.

The engineer Jeremy Sparks from Partridge Events Engineering could then legally certify and sign off on the safety of the design, based on these drawings. In this case, the details and some dimensions of the gantry were altered slightly to suit material thicknesses and setout. Jacinta said, “These files were then emailed to the laser cutters to cut the various steel plates and components of the moving parts. Using the drawings as the basis for everything keeps the work very accurate and gives us a quick turnaround.”

The concrete wall was designed as if it were built of 3ft thick, solid concrete. Between the Art Department and the special effects crew, they researched concrete walls and slabs that had been damaged by explosions, noting how concrete cracks and crumbles, and the nature of bent, broken steel rods. The SFX team showed Jacinta their library of explosions from previous movies they had worked on and some real life YouTube clips.

She said, “I created the explosion animatics, not necessarily to indicate their final look but to help start discussions about explosion size, shape and the smoke that followed on, and the advisability of using a practical explosion on set. It also indicated how SFX would make the balcony break. But after many discussions, the story changed and instead of a gas explosion, the fight itself caused the damage in the wall.”

SFX built the breakaway pieces. Individual ‘broken’ pieces of wall were set up to look like an undamaged wall, each piece fastened to its own cable. These cables were gathered to a single sling, which was coupled via pulleys to a large pneumatic cylinder that had enough power to pull the wall apart. On cue, the cylinder was actuated and the wall broke away.  www.jacintaleong.com